Koç University’s Research Center for Anatolian Civilizations (ANAMED) is proud to announce “The Characters of Yusuf Franko: An Ottoman Bureaucrat’s Caricatures,” featuring the never-before-seen caricature oeuvre of Yusuf Franko Kusa Bey. A late 19th-century Ottoman bureaucrat, a Minister of Foreign Affairs, a governor general, and a man of society, Yusuf Bey was also an avid caricaturist. The exhibition revolves around Yusuf Franko Kusa Bey’s caricature album from the Ömer M. Koç Collection. It will remain open at the ANAMED Gallery in Istanbul from 26 January to 1 June 2017.

“The Characters of Yusuf Franko: An Ottoman Bureaucrat’s Caricatures” was curated by Bahattin Öztuncay, designed by Yeşim Demir Pröhl, and features scripts written by K. Mehmet Kentel. Yusuf Franko’s album, compiled between the years 1884 and 1896, will be on display for the first time. Through the exhibited caricatures, which mark an interaction with the European caricature tradition, the visitors will meet satirically charged portraits of wealthy capitalists, members of high society, Ottoman pashas, Levantines, artists, and diplomats of the late 19th century. The caricatures offer the visitors the opportunity to take note of the colorful social networks to which Yusuf Franko belonged, especially those of the Beyoğlu-Pera quarter, as well as the global locales of Istanbul. By following the caricatures, their real-life counterparts, and the places they frequented, the exhibition emphasizes how the Galata-Beyoğlu axis became a financial and diplomatic center as well as a destination of international culture and arts.

The exhibition not only evaluates the works of Yusuf Franko from the perspective of space and social networks, but also it touches on significant places of the period, such as the Naum Theater. In part, the exhibition also serves as a reminder of those locales which no longer exist and did not find their way onto the album. Focusing on Yusuf Franko and his innovative caricatures, “The Characters of Yusuf Franko: An Ottoman Bureaucrat’s Caricatures” also explores the prominence of the Franko Kusa family within the Ottoman Empire and the history of the caricature genre in Europe. Moreover, the exhibition narrates the album’s long trek through various countries and its return to Beyoğlu. In addition to the album and its contents, relevant photographs, documents, and publications from various collections — especially the Ömer M. Koç Collection — will be featured in the exhibition.

In conjunction with the opening, a special two-volume publication containing a book of research articles, Youssouf Bey: The Charged Portraits of Fin-de-Siècle Pera, and a facsimile edition of Yusuf Franko Kusa’s album, Types et Charges, will be available.

Koç University’s Research Center for Anatolian Civilizations (ANAMED) was founded in 2005. The center grants fellowships to approximately 30 researchers each year, supporting the work of doctoral students and postdoctoral scholars from Turkey and other countries. Since 2005 over 300 scholars have been granted fellowships to conduct their research at ANAMED. The primary activities of the center include granting fellowships to researchers specializing in Turkey’s cultural heritage, providing library services, organizing public meetings such as symposia, conferences, and workshops, hosting exhibitions, and publishing scholarly works related to Anatolian civilizations.

Yusuf Franko, son of Nasrî Franko, was born in 1856 in Istanbul. Following in the footsteps of his father, he joined the Ministry of Foreign Affairs at the age of 17. He was the director of the Department of Communication, and later he directed the special cabinet of Minister Tevfik Paşa. He oversaw negotiations with France during the Lesbos crisis and managed to keep the island under Ottoman rule, which brought him the appreciation of Sultan Abdülhamid II. Just like his father and his uncle, he found himself in the position of governor general, mutasarrıf, of Mount Lebanon. Yusuf held no governmental position from 1912 to 1918, but during the last years of the Ottoman State he was the minister of the Post and Telegraph service.

Yusuf was one of the most sought after names in Pera society. He married Lucie Caporal, the daughter of Franco-Levantine businessman Alfred Caporal, and they had two daughters named Giselle and Claire. When he died in 1933, he left behind an outstanding career and a one-of-a-kind oeuvre. 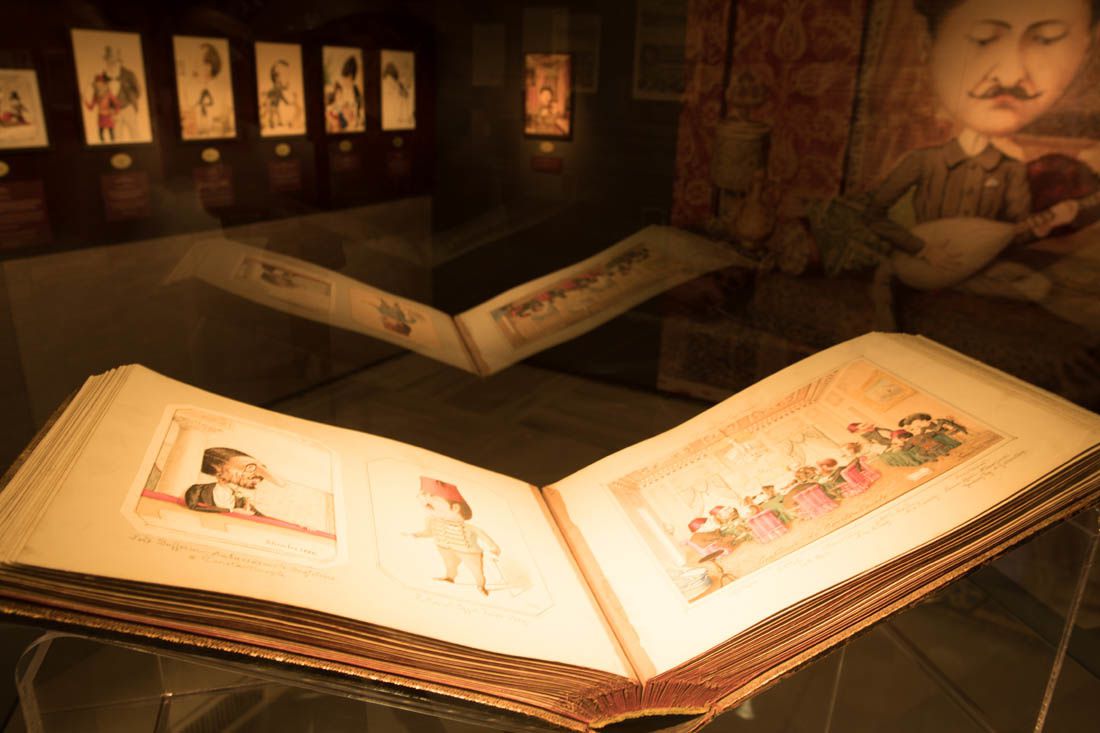 The Characters of Yusuf Franko: An Ottoman Bureaucrat's Caricatures | ANAMED

Focusing on Yusuf Franko, the innovative caricaturist of his time and on his works, the exhibition "The Characters of Yusuf Franko: An Ottoman Bureaucrat's Caricatures" deals with the prominence of